JACKSON, Tenn. — The Jackson City Council met Tuesday morning, but it was a special guest who became the talk of the town. 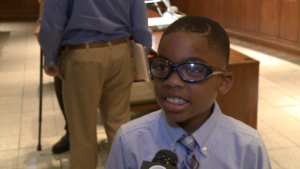 Nine-year-old Carlos Roberson Jr. is a fourth grader at East Elementary. He led the September Jackson City Council meeting in prayer and the Pledge of Allegiance.

“Praying and leading the national anthem is great for a young man like me,” Roberson said.

Inside the meeting, the Council heard from a representative of the NAACP who wants to see citations issued instead of arrests when it comes to marijuana.

“What their request was, we are already doing. We issue citations for a minimal amount of marijuana,” Mayor Gist said.

Also, the nine-member council unanimously voted to allow the county be in control when it comes to car registrations.

“It’s scheduled to be a mammoth roundabout,” Mayor Gist said.

In a 6 yes, 2 no and one abstaining vote, the Council approved Ford Construction Company to take the lead on constructing the downtown roundabout.

It will be constructed at the intersection of Deaderick Street and Highland Avenue and will cost an estimated $1.6 million.

Estimated to take over a year to complete, Mayor Gist says the first step is to demolish buildings around the intersection. The roundabout also comes to help the Lyft and Jackson Walk Apartments.

“It was a prerequisite that the city construct the roundabout to slow the traffic down because of a lot of pedestrian traffic crossing highland,” Mayor Gist said.

Back inside the meeting, the eyes of the future watched hoping to inspire others.

“If they do the right things, then they can accomplish things in life,” Roberson said.