BOLIVAR, Tenn. — Monday marks 16 years since the September 11th terrorist attacks, and Bolivar residents came together Sunday to honor the heroes that gave their lives that day. 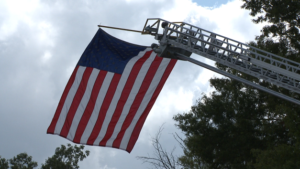 “This is something we don’t ever need to forget,” said William Brown, who lives in Bolivar.

He was just one of many residents that came together for the solemn ceremony to remember.

“It still today rings so heavy in my heart and mind, because these people had no idea what was coming,” he said.

Brown came to pay his respects at the ceremony, honoring those who died on September 11th, 2001.  He also directed the choir.

“I think as an American, we should all remember this just simply because it was an attack on our soil,” he said.

The goal of the ceremony is to keep alive the memories of those who were lost.

“So many lives were lost and so many loved ones were left without mom, dads and children,” said Eddie Kessler, who coordinated the event.

Kessler said this is the 12th year for the ceremony in downtown Bolivar. But this year, the ceremony had a special dedication.

“We’re going to pray for the people in the hurricane and in Texas and in Florida, as well as unity that we need in our country right now .”

But Kessler said at times like these, it’s important to remember one thing.

“We continue to remember what our country stands for, and we need to honor God in everything we do.”

The commemoration continues in Bolivar Monday. A parade will march downtown to honor our fallen heroes.