BOLIVAR, Tenn. — It’s been 16 years since the deadliest terrorist attack on U.S. soil. West Tennesseans took a moment Monday to pause and remember those who lost their lives that day. 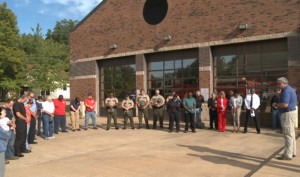 Flags fly at half staff in Bolivar as residents pause to remember.

“As time goes on, people seem to forget, and we don’t want people to forget this day,” Bolivar Fire Chief Lynn Price said.

Sixteen years have passed since the attacks on 9/11.  More than 3,000 people lost their lives, but Price says they will never be forgotten.

“It’s one of the things here at the Bolivar Fire Department we want to remember at our sisters and brothers loss during 9/11,” Chief Price said.

An annual commemoration began with a breakfast for first responders. A parade then made its way downtown at exactly 8:37 a.m. to coincide with when the Pentagon was hit.

Organizers say one of the goals of Monday’s ceremony was to educate the next generation about what happened that day.

“It’s just something we need passed down through the generations so we don’t forget the people who lost their lives,” Price said.

Bolivar Police Chief Pat Baker was out on a call when it happened. Like many, he remembers exactly what he was doing that day.

“We try to find a television set and started watching, and just like the rest of America we were just in disbelief,” Chief Baker said.

But he says our country will only continue to grow stronger.

“Continue to do what you do. Remember the fallen and just to give thanks to all the men and women in uniform,” Baker said.