HARDIN COUNTY, Tenn. — More witnesses, including the first law enforcement officer on scene, take the stand as the second day unfolds in the murder trial for one of the men charged in the disappearance and death of nursing student Holly Bobo. 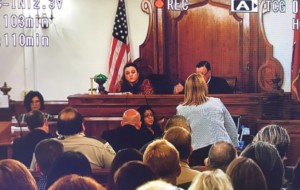 Tony Webber, a deputy with the Decatur County Sheriff’s Department, was the first officer on scene. He said there was blood in the carport and some splattered on the wall.

The state also called Tennessee Bureau of Investigation Special Agent Lawrence James to the stand. James said his focus was the garage area and that he also did some work inside the house.

TBI Special Agent Lawrence James said this is one of the photos taken at the scene showing blood in the carport.

James presented photographs from the scene including what he said was blood found in the carport. He said some of the blood found around the car could indicate a struggle took place.