DECATUR COUNTY, Tenn. — Authorities have made what is being called a major drug bust in Decatur County.

“It was a major bust for us, and we feel like we put a big dent in drug traffic,” Decatur County Sheriff Keith Byrd said.

Meth, marijuana and thousands of dollars in cash were all found Wednesday night inside a home outside Decaturville.

It’s a bust Sheriff Byrd is calling a milestone.

“We feel like with the search warrant we took a major meth dealer off the streets, and this is big stuff for us,” he said.

Because his home is so close to Decatur County Middle School, Inman was also arrested on a drug-free school zone violation.

Blake Barnett, 27, who was with Inman at the time was also arrested for an unrelated incident in Perry County. 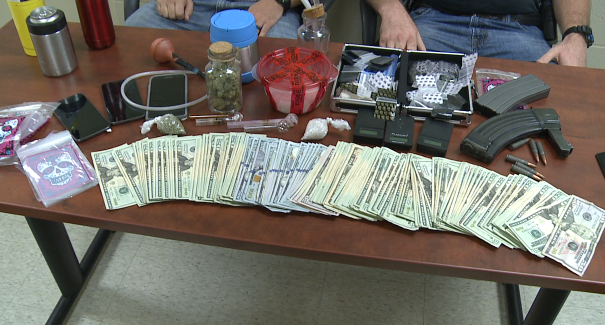 “Perry county was looking for him and we had no idea,” he said. “But when we got there, he was there, so we were able to capture him.”

Byrd said Decatur County has always had a problem with drugs, but he says they are working to fix that.

“I’d say 90 percent or more of the crime we have is directly related in some way to drug activity,” he said. “But we’re eating away at these guys one bite at a time.”

Sheriff Byrd says has a message for those in the area.

“Anybody else that wants to conduct criminal activity in Decatur County, sometime in the near future we may be coming after you too,” he said.

Both Barnett and Inman are being held in the Decatur County Detention Center.

This is an ongoing investigation and additional charges are possible.

'We're all Tyre': Family prepares to lay Nichols to rest