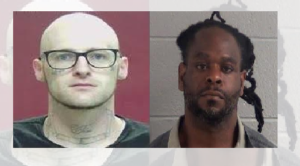 COOKEVILLE, Tenn. — According to a press release issued by the TBI, special agents with the TBI alongside detectives of the Loudon City Police Department have arrested two individuals who are suspects in a May homicide in Loudon.

In early May, the victim was found deceased in his home in Loudon. TBI agents joined local detectives in investigating the alleged murder of James Johnson on May 10th at the request of District Attorney Russell Johnson.

As a result of the investigation, agents developed Christopher Orr and Clarence Porter as suspects, according to the press release.

On September 12th, Christopher Orr was arrested in Jefferson County, Colorado, where he is currently awaiting extradition back to Tennessee.

Clarence Porter was arrested by the U.S. Marshals Service Smokey Mountain Fugitive Task Force in Chattanooga on August 17th . He was booked into the Loudon County Jail and is being held on a $500,000 bond.

On August 14th, the Loudon County Grand Jury returned indictments charging Christopher Orr and Clarence Porter each with one count of First Degree Murder, one count of Especially Aggravated Robbery, one count of Theft over $1,000, and one count of Felon in Possession of a Firearm.