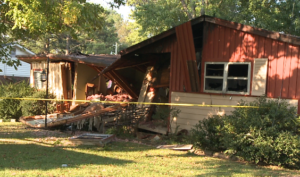 According to fire officials, the living room, bedroom side received the most damage.

HUMBOLDT, Tenn — Humboldt fire officials say an elderly woman has been taken to the hospital after a gas explosion at her home early Saturday morning.

It was a quick response from Humboldt first reponders after a home on Avondale Road exploded, around 6:20 a.m.

“We found the house to be partly on fire and part of the house still left,” Captain Greg Lencioni said.

Fire officials knocked the fire down about 5 minutes after they arrived, finding an elderly woman trapped inside. Luckily, there was a fire station two doors down with first responders witnessing the whole thing.

“It was really close to shift change time, and they were all standing outside. So, our response time was in seconds,” Lencioni said.

Captain Lencioni believes a gas leak lead to the explosion. “One of the gas appliances or a rupture of a gas line underneath the house. We’re not sure yet – under investigation,” 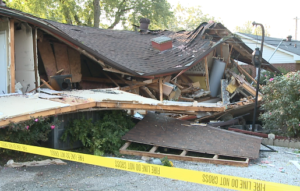 The back side of the exploded home.

The wreckage of the explosion blew windows, walls, and the back door right off the home.

“I think there’s one wall still standing one exterior wall the rest of them are laid out,” Lencioni said.

The unidentified woman was alert when firefighters found her. The woman was taken to a hospital in Memphis to be treated for her injuries. Fire officials said they didn’t hear any smoke alarms go off, but say they could have been destroyed after the explosion.

The cause is still under investigation.