HARDIN COUNTY, Tenn. — The prosecution in the murder trial for Zach Adams rested their case Monday afternoon. The defense has called their first witnesses. 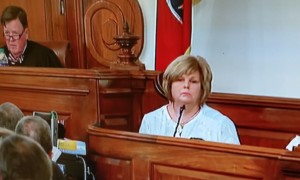 The defense called Rita Austin as their first witness. She is the mother of Shayne Austin.

Shayne Austin was never charged in the case but at one time was considered a key witness. He died in Febraury 2015 in Florida in an apparent suicide.

Austin’s mother said he always maintained his innocence to her.

She said he had a history of drug use since he was a teenager. She said his drug use had worsened in the time leading up to his death.

The defense’s second and final witness for the day was Judy Evans, Rita Austin’s sister.

Stay with WBBJ 7 Eyewitness News and www.wbbjtv.com for ongoing coverage of the trial.