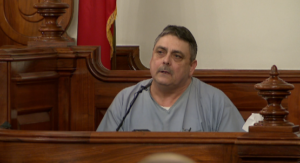 “He stated his grandson was over there causing problems,” Maxwell said.

Adams then called back and said he didn’t need police, but something happened leading to another call for help.

Maxwell said officers documented the incident as a “verbal argument” and no arrest was made that night.

After a short recess, state prosecutors called registered sex offender Terry Britt to testify. Britt was a suspect early on in the investigation.

Although Britt’s alibi of shopping for a bath tub checked out, investigators still looked at him as a suspect because of his criminal history. Tennessee Bureau of Investigation agents searched his house and bugged his phone.

“They had cut pieces of material off the couch, my shop trailer, busted the door in, took my vans, computers — it was a mess,” Britt said.

A cross-examination by the defense began with Britt’s initial reaction to learning of Holly’s disappearance.

“When the police showed up at your house to talk with you, the first thing you said to them was ‘I didn’t rape nobody,’ didn’t you?” defense attorney Jennifer Thompson said

Britt said his checkered past led to a lack of trust in law enforcement.

At some moments during Britt’s testimony he grew to be combative when answering questions from the defense.

“If there’s a record from Wal-Mart in Lexington showing you purchased that cellular telephone almost one month to the day she disappeared,” Thompson said.

Britt responded, “Well if you got record from Wal-Mart saying I purchased a phone, you’re in some other world than what I’m in because we’re not in the same world.”

Thompson brought up a recorded conversation between Britt and a TBI agent in which Britt described his theory of what happened to Holly.

“From the picture they had on the wall at the glass at the store, I said she looked good and probably somebody, whoever got her, probably got her for a sex slave,” Britt said.

Britt said he didn’t have anything to do with Holly Bobo’s murder and that he never knew her prior to her disappearance.

Zach Adams is charged with kidnapping, raping and murdering the 20-year-old nursing student.

Stay with WBBJ 7 Eyewitness News and www.wbbjtv.com for ongoing coverage of the trial.