HARDIN COUNTY, Tenn. — Testimony continued Monday in day seven of the Holly Bobo murder trial as witnesses who ran in the same circle as Zach Adams took the stand. 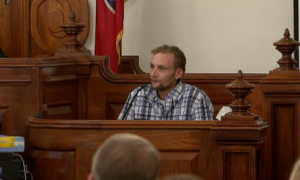 Anthony Phoenix, one of Adams’ former “drug buddies,” was in jail the day Holly Bobo went missing. State prosecutors asked him about his reaction hearing the news from behind bars.

“The first word that came out of my mouth was, I wonder where Zach was,” Phoenix said.

Phoenix was released from jail in October 2011 and he went back to hanging out with Adams.

“We used to get high and whatever we could do to afford that,” Phoenix said.

With the case of Holly Bobo’s disappearance still being a mystery around the time Phoenix was released, her name came up in conversation. Phoenix says whenever Bobo’s name was brought up, Adams would give off a sketchy demeanor.

“Holly Bobo was mentioned and Zach proceeded to clear the whole house out,” Phoenix said.

Phoenix said one day Zach mentioned a conversation he had with Karen Bobo, Holly’s mom.

“Real concerned whether or not she believed what he told her. Said he gave her a hug and asked did I think that mean that she believed him,” Phoenix said.

Since Adams and Phoenix were heavily involved in drugs, the two were often together. Phoenix described a conversation he and Zach had while driving around looking to fuel their drug problem.

“Just kept talking and was like, I couldn’t have picked a prettier b****,” Phoenix said.

Pheonix says at that moment there was no doubt in his mind Adams was talking about Holly Bobo.

“Right then it kind of clicked to me and I told him, well, I don’t want to hear about it,” Phoenix said. “And he said something in between that but in the end he made the comment that it sure was fun.”

The defense team says law enforcement looked into Phoenix as a possible suspect.

“Not something I would do high or sober,” Phoenix said.

Although Phoenix heard those gruesome statements, he never reported it.

“You were so concerned and so convinced he meant Holly Bobo you jumped out of the truck and you went straight to the police and told them about this, didn’t you?” defense attorney Jennifer Thompson said.

Phoenix responded with “Do you have it on paper that I did? No, I didn’t.”

With more than 40 witnesses taking the stand, the prosecution rested their case a little before 3 p.m. Monday.