CDC says to get flu shot before end of October

JACKSON, Tenn. — It is hot outside, but health care workers say flu season is here. The Centers for Disease Control and Prevention recommends getting a flu shot. 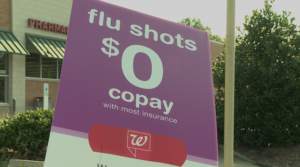 “The CDC says once you start seeing flu cases in your community, that is the time to get the flu vaccine,” Deborah Leggett, co-owner of the Primary Care Clinic of Jackson, said.

Leggett, a nurse practitioner, said they have already seen at least one case of the flu this season. “You’ll have fever, chills, coughing, sweating,” she said.

Leggett said the elderly, health care workers, and people with compromised immune systems are at a high risk and need the vaccine. “Pregnant women, children from six months up to age 59 months,” she said.

The CDC recommends people get their flu shot before the end of October.

Several people told WBBJ 7 Eyewitness News they are hesitant to get the vaccine.

“I’ve never had one, and I’m doing fine without it,” Ernest Lawrence, of Jackson, said.

“They said that you get a shot, you receive the flu,” Thomas Fuller, of Jackson, said.

Leggett said that is a myth. “You cannot get the flu from the flu vaccine,” she said.

The CDC said it takes about two weeks for the vaccine to protect you from the flu.