WBBJ Staff,
Dr. Ronnie Joseph Wilburn Sr. went home to be with Jesus on Sunday, September 17, 2017. Dr. Wilburn died peacefully at his home after an extended illness. He was born on August 30, 1948 to Ruth and Harry Wilburn. 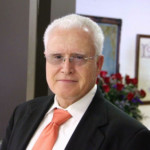 Ronnie was called into the ministry at the age of 15. He graduated from Delta State University with a Bachelor’s degree in education, Mid-America Baptist Theological Seminary with a Master’s degree in Divinity, and received his Doctor of Ministry from Southern Baptist Theological Seminary in Louisville, KY. He served as pastor to churches in MS, KY and TN. His last pastorate was Meridian Baptist Church, where he served for over 20 years, and remained as Pastor Emeritus until time of death. He was also former Director of Missions in Shelby County, former president of the TN Baptist Convention, and served on various boards of the TN Southern Baptist Convention.
He is survived by his wife of almost 46 years Barbara, children Angela Bryant, Shana Taylor (Jon), and Joey Wilburn (Melanie), grandchildren Samuel Ross, Rheagan Wilburn, bonus grandchildren Lauren, Zach and Adam (Lauren) Taylor, Dusty Wolverton (Lakelyn), and one bonus great grandchild Eliana Wolverton. He is also survived by his brothers Reverend Bobby Wilburn (Sharon) and Ricky Wilburn (Trudy), and many nephews, nieces and aunts.
The family will receive friends on Tuesday, September 19, 2017 from 5:00-8:00 p.m. at Meridian Baptist Church. Funeral Service will be held on Wednesday, September 20, 2017 at 1:00 p.m. at Meridian Baptist Church with visitation from 12:00 until time of service. The deacons of Meridian Baptist Church, both active and inactive, will act as pallbearers and honorary pallbearers. The family requests that memorials be directed to Meridian Baptist Church, American Heart Association, or Mid-America Baptist Theological Seminary.
Share this...