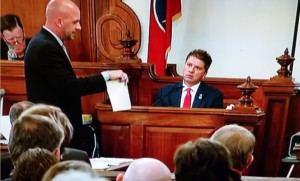 Taking the stand first was former Tennessee Bureau of Investigation agent Terry Dicus, the original agent for the Holly Bobo case. He was on the case from when Bobo went missing in 2011 until 2013.

Dicus spend a good deal of time discussing Terry Britt, a previous suspect in Bobo’s disappearance. He said that during his investigation he determined Britt’s alibi was “garbage” and that he was long considered the primary suspect.

Britt testified Monday. He was never charged in the case.

The defense lawyer pressed the former agent about cell phone records in the case. Dicus said Adams’ phone pinged on a different tower than Bobo’s the morning she went missing, leading him to believe Adams wasn’t involved in the kidnapping.

Dicus also said there was no evidence of a relationship between Holly Bobo’s brother, Clint Bobo, and Zach Adams. He said the idea that they were “meth buddies” is “ridiculous.” This contradicts Jason Autry’s testimony that Adams went to the Bobo home to teach Clint to make meth.

Attorneys also questioned Dicus about the physical appearances of Zach Adams, Dylan Adams, Shayne Austin and Jason Autry in April 2011. He also discussed the description Clint Bobo gave to investigators of the person who took Holly.

Dicus said if Clint Bobo was lying about the description, then we will never know who did it.

Adams is charged with the rape and murder of the 20-year-old nursing student who disappeared in April of 2011 from her Decatur County home.