Riverside playing for their fallen brother the entire 2017 season

DECATURVILLE, Tenn. — Before the 2017 season started, the Riverside Panthers were dealt a huge blow. Their teammate and brother, Mason Keen, died in a car accident. From that moment the entire season was dedicated in honor of Keen. The Panthers are off to a 3-1 start and last Friday shutout their rival Scotts Hill, 31-0 which earned the team of the week title for week five.

“I think part of the reason you see the effort that they give on Friday nights has something to do with the effort that he [Keen] gives and they want to be able to contribute and to honor him in that way,” head coach Johnnie Frost said. 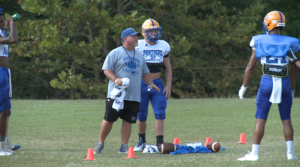 Frost said it was a great honor to be named the team of the week and it shows their fans showed up for them, the way they are showing up for their brother.

This Friday the Panthers will look to pick up win number four taking on Camden.