Testimony wraps up in day 9 of Holly Bobo murder trial 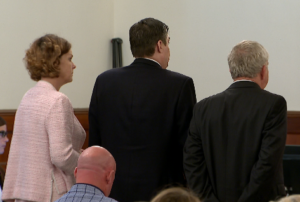 after nine days of testimony, from dozens of key people, both the state and defense have rested their case. Wednesday the defense team called their last few witnesses, hoping to prove Zach Adams innocence.

This was a last attempt by the defense to point the finger at Britt as the one responsible for Holly Bobo’s death.

“Web history again from nudevista.com in the search box of the top of that the user typed rape and scene,” Garnett said.

The defense rested its case Wednesday afternoon after calling their last witness, shortly after Zach Adams was given an opportunity to testify.

Judge Creed McGinley said “Is it your election not to give testimony?” Zach Adams responded “Yes sir, that’s correct,”

Adams declined to take the stand, which led to the state presenting rebuttal proof. The state called on Dana Bobo, Holly’s father, and lead investigator with the TBI Jack Vanhooser. Vanhooser was in charge of the West TN Criminal Investigation Division, a fresh set of eyes on the case.

“The case agent on the case needed to be benched he needed to be put on an administrative duty as opposed to following leads,” Vanhooser said.

Vanhooser says he was referring to ex-TBI agent Terry Dicus. “He had lost his objectivity he had tunnel vision on a particular suspect and was not objective about all of the facts coming into the case,” Vanhooser explained.

After closing arguments, the jury should be able to begin deliberations Thursday afternoon. The trial continues Thursday morning in Savannah.