The jury of the Holly Bobo murder trial deliberates for almost three hours, but still no verdict. 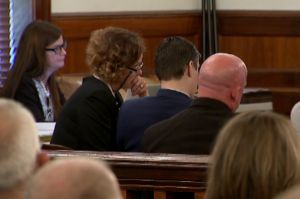 The jury was unable to reach a verdict by the end of the day. Deliberations didn’t begin until shortly after three this afternoon, so that probably wasn’t enough time for them to go through all the evidence and facts in the case. Although there’s no decision right now, Zach Adams fate lies in their hands.

Judge Creed McGinley let them go, as they have been sequestered for the duration of the trial, and will be until a verdict is reached.

“You’ll be escorted to the jury room when you’re ready to deliberate the officer will leave pull the door close and recommence your deliberation,” Judge McGinley said.

Before the jury was dismissed they heard closing arguments from both the state and defense.

“Zachary Rye Adams is 100% innocent of the charges he is facing in this case.” Defense Attorney, Jennifer Thompson said.

State Prosecutor said “Do what needs to be done we’ll be waiting right here,”

Dozens of law enforcement have been patrolling the area, from the air and on the ground, since the first day of trial. There’s still a heavy police presence as everyone waits for the jury’s decision.

Three jurors were randomly selected as alternates and the other 12 will continue to deliberate.

“The 3 of you that are now alternates you can’t discuss with the other people you’ll be kept pretty separate apart, but there can be no communication from the 12 to the 3 of you that were drawn at random,” Judge McGinley explained.

Judge McGinley says he appreciates the jury’s patience and devotion for being apart of this trial.

As a reminder, Zach Adams faces charges of first-degree felony murder, premeditated murder, especially aggravated kidnapping and aggravated rape in the death of Holly Bobo. The jury will reconvene Friday morning at 8:30 a.m.

WBBJ 7 Eyewitness News will continue monitoring jury deliberations Friday morning and have live coverage when there is a verdict.