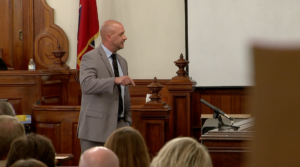 “The only question is do we have the right people? And the math on that is pretty simple. Four people,” prosecutor Paul Hagerman said.

“Zachary Rye Adams is 100 percent innocent of the charges he is facing in this case,” defense attorney Jennifer Thompson said.

Both teams went before the court Thursday one last time before the jury decides if Zach Adams is guilty of kidnapping, raping and killing Holly Bobo.

Hagerman went through evidence tearing into the witnesses for the defense, Terry Dicus and John Walker, saying they did not focus on Zach Adams like they should have.

He also says they were too focused on another potential suspect, Terry Britt.

“But after ripping into his life, after all of that, Agent Dicus, what did you find that connected him to this crime? And his answer was what? Absolutely nothing,” Hagerman said.

“You’ll see that their story is absolutely full of holes, and what they want you to do is base all the many mysteries on the holes based on their story,” defense attorney Thompson said. 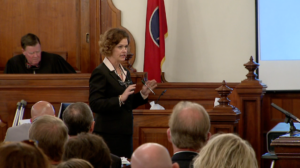 Thompson told the jury testimony from Jason Autry should not be trusted.

“Jason Autry was able to sell his death penalty to the government for a tall tale,” Thompson told the jury.

The state reminded the jury of Jason Autry’s testimony and his claims that he was there.

“Mr. Adams’ life is on the line,” Thompson said.

Both mentioned Zach Adams cleaning a mattress, which witnesses say they saw him doing after the police left.

“The fear is that Holly’s DNA is on him and he had transferred it to his mattress or to his car,” Hagerman said.

“The government knew the mattress belonged to Rebecca Earp, and she testified she had a mattress at Zach’s house,” Thompson said.

The state showed the jury what they think is the murder weapon and also showed pictures of Holly Bobo’s remains found years after her disappearance.

“Nobody in this world knew except the two men that were there when it happened,” Hagerman said.

Thompson went piece by piece through nine days of testimony and evidence, working to find flaws in the state’s argument.

The defense also presented the gun, saying it was not strong enough to penetrate Bobo’s skull.

She says the government faced pressure and needed to pin the crime on someone quickly.

The jury began deliberations just after 3 p.m. Thursday. Judge Creed McGinley announced at 6 p.m. the jury would go into recess until 8:30 a.m. Friday.

As ice thaws, eager readers return to the library