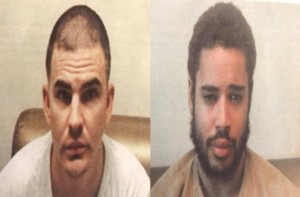 “We would rather over react than under react,” Bolivar Police Chief Pat Baker said.

“They were able to get that key from him by force and get to the door to get to the outside to climb the fence and leave the facility,” Baker said.

One person describes the men as “some mean individuals,” and records show they are no strangers to police.

Both are inmates of Gibson County, and authorities say they were cellmates while in jail.

“We called the Tennessee Highway Patrol and they called a helicopter. Hardeman County Sheriff’s Department showed up, and Whiteville,” Baker said.

Police thought they had them after a tip came in.

“We received a call. A gentleman said he had two people knocking on his front porch. When we got there, we weren’t able to find anything,” Baker said.

Now, still on the run, police are warning residents these men are probably looking for a car if they haven’t gotten one already.

“Change your routine a little bit,” Baker said. “Get out of the norm, watch what you’re doing and pay a little more attention.”

As the day continues, so does the search.

“These are the type of guys we want to take off the street,” Baker said.

Authorities say to call 911 if you see either of the men.