Illegally dumping in Madison Co. could cost you

DENMARK, Tenn. — The grace period is over when it comes to dumping in Madison County. If you get caught, it will cost you. 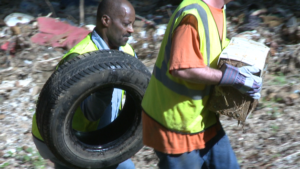 “We spend thousands of dollars each year to clean up sites like this one,” Madison County Mayor Jimmy Harris said. “Believe it or not, this one has been cleaned up.”

“We cannot continue to burden the taxpayers with cleaning up people’s garbage on the side of the road,” Mayor Harris said.

“You’ve got ravines, these are your ditches,” Madison County Sheriff John Mehr said. “That’s where your water’s flowing and what you’re doing is stopping it up.”

According to Sheriff Mehr, a judge can order those who are illegally dumping to clean up their own mess.

Crime Stoppers is also offering cash rewards for turning in someone who has used these dumpsites.

“Report who these people are,” Sheriff Mehr said. “These are people that are having houses remodeled and their contractor, or whoever is doing the work, is bringing the stuff and dumping it.”

County leaders say dumping could bring down property values and keep people from moving to the county.

“Take it to the landfill and get rid of it,” Sheriff Mehr said. “Don’t come out here and destroy your neighborhoods.”

There are 10 legal solid waste dumping sites set up throughout Madison County.