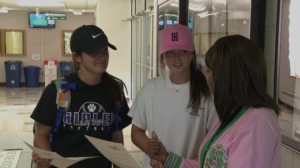 “We want to register as many people as possible,” Patricia Beasley, a sorority member, said.

Beasley helped get students signed up. “It’s important for us to target young people because otherwise they probably wouldn’t register to vote,” she said.

The sorority teamed up with other organizations and volunteers across the country for National Voter Registration Day. The goal is to make sure everyone has an opportunity to vote.

“It’s important to register because that’s the only way you can make change,” Machelle Banks, a sorority member, said. “If you’re not able to vote, then you’re really not a voice.”

The ladies with Alpha Kappa Alpha Sorority said they helped get about 200 people registered to vote at Jackson State Community College last year.

“Everyone fought for women to have the right to vote and everything, so I mean the least I could do is vote since they fought for it,” Kijsa Williams, a student, said.

Beasley said a lot of students want to register to vote but have not had a chance or do not know how. “It’s important to register because you are a part of the decision-making process,” she said.

Organizers said they registered 138 people to vote during the Tuesday event.