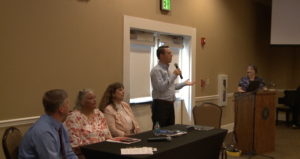 The program began with a live broadcast from Washington, D.C., called, “Recovery, Prevention, and Hope: Confronting the Opioid Crisis,” with a national panel convened by the U.S. Department of Health and Human Services discussing awareness and reinforcing the role of community and families in long-term recovery and prevention.

After the broadcast, local experts shared their knowledge on alcoholism and drug dependency. Kim Parker of Pathways said one of the issues needing attention is funding for treatment.

“Even if they bypass the stigma and come to get treatment, sometimes that’s not available from them because the funding is not there,” Parker said.

Damien Nethery of the Grove said another improvement needed is access to care.

Panelists said the amount of community support is uplifting.

“It’s so encouraging knowing that here in Jackson and West Tennessee that there is a community that wants to learn, that wants to know what’s going on,” Nethery said. “They want to hear the stats and research, then they also want to be a part of the solution.”

According to statistics provided by the panel, Tennessee ranks No. 7 in the most drug overdose deaths in our country.