UPDATE — The scene is clear after a Thursday morning suspicious package scare in downtown Jackson. 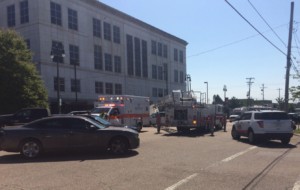 The federal courthouse is back open after crews investigated the report of a suspicious package, according to EMA Director Marty Clements.

Clements said crews determined there was not a threat. He said two people were decontaminated as a precaution and were found to have not been exposed to anything dangerous.

There is not yet word on what may have been in the package.

Clements said the investigation is now in the hands of the FBI.

“But we know that it was not hazardous and none of the people exposed have any problems,” Clements said.

JACKSON, Tenn. — Crews are on scene investigating a suspicious package at the federal courthouse in downtown Jackson, according to Fire Marshal Lamar Childress with the Jackson Fire Department.

According to a viewer, Shannon Street is currently blocked as authorities investigate the package.

Details are limited at this time.