LEXINGTON, Tenn. — In an update in the hazmat situation in Lexington that we first reported Thursday night, officials say the incident was not drug related. 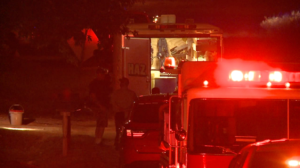 Hazmat teams were called in to seal off a residence Thursday after an unknown substance was found inside.

Three people were transported to the hospital after they were overcome by fumes. Two were released and one was kept overnight and at last check was listed in stable condition.

Crews did not discover what caused the fumes but did find small amounts of household chemicals.