JACKSON, Tenn. — This week’s Educator of the Week presented by the Tennessee Education Lottery teaches right here in Jackson. 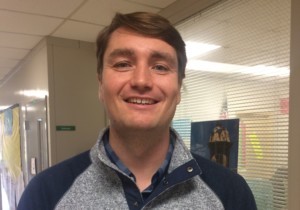 “I think the most important thing is just the passion for wanting to learn new things,” Adams Simpson said.

“There’s kind of a stigma that basketball coaches don’t make good teachers, but he was a fantastic teacher. He was a teacher first and a coach second,” Simpson said.

Simpson is originally from Frankfort, Ky. He later moved to Jackson and was a history major at Lambuth University. He is now pursuing his master’s degree at the University of Tennessee at Martin.

“I think that to be a successful citizen, a successful human being, you have to be able to serve others,” Simpson said. “So being able to be motivated to get out and to try new things and challenge yourself but also keeping a service attitude throughout that is really important and valuable.”

Before teaching, Simpson was a full-time youth minister. He says the students are what bring him back every day.

“Just having students that even when they don’t want to learn, you can find something that encourages them that day, that keeps them motivated, that keeps them coming back as well,” Simpson said. “It keeps them eager to hear what we’re going to do that day.”

Simpson says he just wants to give back.

Simpson will now be eligible for the statewide Tennessee Education Lottery Educator of the Month Award. Starting in October, to vote for him or any of the other nominees, visit seehowitaddsup.com.