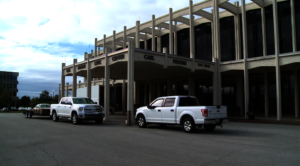 “It appears that we’re all vulnerable as soon as we walk out of the house,” Jackson Mayor Jerry Gist said.

“We mandate security when people sign their lease agreement with their public venue, so we will have police officers there,” Gist said.

Perry Murphy manages the Carl Perkins Civic Center. He said the size of the event typically dictates the level of security. “We don’t have metal detectors, and I have seen on occasion bags being checked for larger events,” Murphy said.

Jackson police said all of their officers at the department go through active shooter training. “We think we’re about as prepared as we can be,” Gist said.

Gist said officers check suspicious bags at public venues like Oman Arena, The AMP and the Carl Perkins Civic Center. “I don’t really anticipate any policies changing,” he said. “I think it serves us well to be a little bit more alert.”

Jackson police said when it comes to private venues, they can help with security in parking lots but it is up to the venue to provide security inside.