BENTON COUNTY, Tenn. — A West Tennessee man’s son has been identified as one of the more than 500 people injured during the mass shooting Sunday night in Las Vegas. 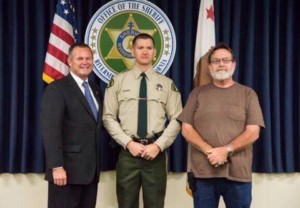 Jason MacMillan, center, is reportedly recovering after being shot twice in the chest Sunday during the mass shooting in Las Vegas, according to family friend Greg Hauck. His father, Mike MacMillan, right, arrived Tuesday in Las Vegas to be with his son in the hospital.

According to a family friend, Mike MacMillan of Big Sandy arrived Tuesday in Las Vegas where his son, Jason MacMillan, is recovering from two gunshots wounds.

Jason, who lives in California, was shot twice in the chest during the Sunday night mass shooting at the Route 91 Harvest county music festival, according to Greg Hauck, a family friend.

Hauck is a friend of Mike MacMillan and the two volunteer together at the Christian Outreach Center of Big Sandy.

Mike found out about his son’s injuries when he got home Monday night from a prayer vigil for Sonny and Heather Melton, a husband and wife from Benton County who also were at the concert when the gunfire erupted.

Sonny was killed in the shooting. His wife, who was not injured, said he died trying to protect her.

Hauck says Jason was initially listed in critical condition but is reportedly improving.

We will have a full report on WBBJ 7 Eyewitness News at 6.