JACKSON, Tenn. — The wife of a West Tennessee man who died while saving her life is sharing her story. In an emotional interview, Heather Melton describes the night of the concert in Las Vegas. 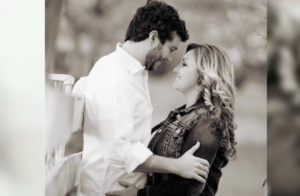 “Horrifically vivid — it’s not an image that probably will ever leave out of my mind,” Heather said.

Heather and her husband, Sonny Melton, attended the Route 91 Harvest Country Music Festival Sunday night in Las Vegas. “They sang ‘God Bless America,’ and everybody was singing at the top of their lungs.”

Heather said at one point the two even thought about leaving early. “And we both said ‘well, we’re having so much fun we’ll just stay.'”

Then tragedy struck. Concert goers heard loud noises within the venue. Some thought it was fireworks. “Then we heard more, and then I saw Jason Aldean run off the stage and everybody just started running,” Heather said.

Heather said hearing the gunshots felt like an eternity. “I said to Sonny, ‘let’s get down,’ and he said ‘no, we can’t get down. We’ll get trampled,'” Heather said. “And he just grabbed me from behind and we started running in kind of a duck position.”

As Heather and Sonny ran to safety, something happened that would change her life forever. “And I felt him get shot in the back.”

Heather, who’s also a doctor, attempted to give her husband CPR, but he wasn’t responding.

“I kept feeling the shots all around me, and I was just screaming for someone to help me.”

In the middle of so much commotion, a few brave people helped Heather get Sonny to the emergency room.

Heather said her final goodbye to her husband at the hospital.

“He was the most selfless person that I’ve ever met, and even until his last breath he proved that,” Heather said. “He sacrificed his life for me, and I think he would do it for other people he didn’t even know.”

Heather said she has no doubt if Sonny was alive he would have helped saved others. She says his nurturing and selfless spirit stems from his career as a nurse.

“He just had a way of caring for people and just an amazing bedside manner,” Heather said. “He would have made an amazing doctor, but he just liked to care for people.”

As for the man responsible for dozens of deaths and hundreds of injuries, Heather said she doesn’t know his name and never wants to see his face.

“I cannot let a monster like that overshadow the people that he took,” she said.

Instead of focusing on the shooter, Heather wants people to remember her husband for the person he was and how Sonny always put others above himself.

“He brought joy to so many people,” she said. “He brought love to a small community. Our community is grieving with pain over this.”

Heather said Sonny told her the moment they met she stole his heart, and for that she’ll always be grateful for the love they shared.

“He saved me before even this incident. He taught me what real love was,” Heather said.

During the interview, Heather also shared that she and Sonny loved going to concerts. They attended one almost every month.

Heather said she has a great support system from her family and Sonny’s who have been helping her through this tough time.