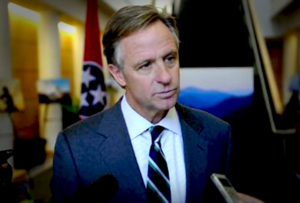 “While I have loved being a mayor and a governor, I don’t feel the same call to run for Senate at this point,” Haslam said in a statement. “At the end of my term, I will have been in public office for 15 years. I feel like I can be most helpful in my next service as a private citizen.”

Given his vast personal wealth and popularity, Haslam would have given other Republican contenders pause had he decided to run.

Haslam can’t run for governor again next year because of term limits.

He told reporters last week that he had been hoping that Corker, a close family friend, would run for the Senate again, and didn’t seriously consider mounting his own bid until he heard otherwise.

Haslam is former Knoxville mayor who was first elected to governor in 2010.

His decision follows the news this week that a major stake in the family owned Pilot Flying J chain of truck stops is being sold to Warren Buffett’s company. Pilot is one of the country’s largest privately owned companies with annual revenues of $20 billion.

“I’ve loved being governor, there’s no secret there,” Haslam said after Corker’s retirement announcement. “And being in the United States Senate is not something that I’ve long dreamed about and thought about. Having said that, I do think it’s really important who serves.”

Haslam had said he would weigh several factors, including whether he is prepared to make the move from being the head of the executive branch in Tennessee to running for a legislative seat in the federal government.

He would also consider the stresses that a move to Washington could put on his family, and whether he is ready to commit to running for at least two six-year terms, he said.

And then there is the question about whether he wants to plunge into the hyper-partisanship that surrounds Congress.

“The country really wants to see some progress made in Washington, and there’s a sense of frustration about people who just want to come in and argue the politics of it,” he said. “I think that’s why everybody looks at Washington and says we’re not getting anything done.”

Haslam is reviled by some Republicans in the state for calling on Donald Trump to step aside as the party’s nominee last year after the release of a videotape in which Trump boasted about groping women.

But the governor said he’s become accustomed to political attacks and wasn’t concerned about being targeted by former Trump adviser Steve Bannon and other groups if he decides to run.

Haslam also has noted that he remains close friends with Vice President Mike Pence and several members of the Trump administration.