PARIS, Tenn. — It’s been four days since the deadly Las Vegas massacre, but its effects are still being felt here in West Tennessee. 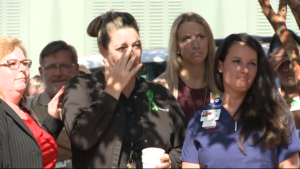 It was a day of remembrance as Henry County Medical Center employees came together Thursday for one of their own.

“Sonny was a great guy. He always had a smile on his face and had an outstanding attitude,” said Craig Peevyhouse, the hospital chaplain. “He was someone we all looked up to and immediately fell in love with when you first met him.”

Sonny Melton, a nurse at the medical center, was attending the Route 91 Harvest country music festival in Las Vegas with his wife when the shots rang out.

Acting as a human shield, he lost his life while protecting his wife, a heroic act his co-workers say doesn’t surprise them.

“Sonny is a nurse, and nurses are by nature very helpful people, and he was definitely an example of caring for others at his expense,” said Tom Gee, chief executive officer for the medical center.

Gee says even though Sonny was new to the center, he made an impact on nearly everyone he met.

“It’s a chance for some healing amongst the staff on the hospital,” he said. “They’re grieving just like everybody else, and especially since it’s one of our own employees and co-workers.”

Through the tears, many couldn’t help but smile as they honored him.

“Not only did he save his wife, but he also saved many others and saved our community. He’s just an amazing man,” Peevyhouse said.

The Henry County Medical Center says they plan to hold another memorial service for Sonny Melton when his family is in town.