WASHINGTON (AP) — An enraged President Donald Trump and a prominent Republican senator who fears the country could be edging toward “chaos” have been engaging in an intense back-and-forth bashing on social media. 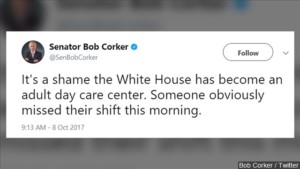 It was a remarkable airing of their party’s profound rifts. In their social media argument, the GOP’s foreign policy expert in the Senate, Sen. Bob Corker, felt compelled to answer his president’s barbs by tweeting Sunday: “It’s a shame the White House has become an adult day care center. Someone obviously missed their shift this morning.”

Trump earlier had laid bare his perceived grievances against the retiring Tennessee lawmaker, in a series of stinging tweets that accused Corker of lacking the guts to run for re-election, among other things.