JACKSON, Tenn. — A woman charged in a deadly hit-and-run in Jackson returned to court Tuesday. Natasha Washburn’s attorney, Jeff Mueller, entered a not guilty plea on her behalf. 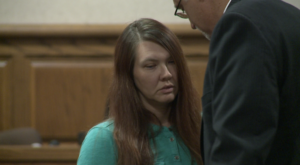 “Enough’s enough,” Murphy said. “She committed the crime. Let’s do the time.”

Natasha Washburn is now charged with vehicular homicide, leaving the scene of an accident resulting in death and violating the financial responsibility law.

“They’ve adjusted the charge to what they feel like is a more appropriate charge for the actions they allege occurred,” Muller said.

Washburn is accused of hitting Robertson on Old Hickory Boulevard in April as she walked home from work, then leaving the scene, according to court documents.

A judge lowered Washburn’s bond from $100,000 to $35,000 the day Robertson died. Washburn is currently free on bond. “We’re not glad she’s still free,” a relative, who did not want to be on camera, said. “We need some answers. It’s been long enough.”

Mueller said attorneys are still gathering facts about the case. “It’s a time taking process, so that’s where we’re at right now,” he said. “Both sides are just trying to figure out exactly what’s there, what the facts really are.”

Washburn is scheduled to return to court Nov. 6 at 8:30 a.m. She declined to comment on camera after court Tuesday.