Help take down the zombies at Battlezone Park in Jackson

JACKSON, Tenn. — What would happen if zombies took over the Hub City? One company thinks shooting them with paintballs is the way to save the day. 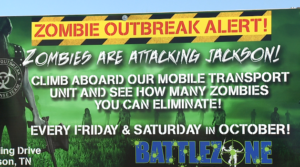 Battlezone Park is a new low-impact paintball and airsoft course coming to Jackson later this year. Located at 80 Bowling Drive, They already had the land and thought shooting at zombies would be a great way to promote their business.

“We have a 1.2-mile course in the woods, and you’re able to shoot on both sides of the trailer and you can interact,” Flowers said. “You pretty much have zombies all around you.”

For just $15 you get 140 paintballs and begin your journey into the woods. 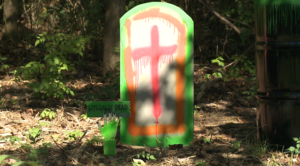 You’ll board the mobile transport unit, and then 12 blacklight spotlights light up the scenes around you helping you take aim at the zombies.

You will travel past 16 scenes full of zombies, skulls and headstones. Flowers said it took about two weeks to set everything up.

“We have zombie actors and a lot of moving targets, a lot of stationary targets, several vehicles,” Flowers said.

The 20 actors wear special gear called zombie armor to protect them from the paintballs.

The trail is open starting at 7 p.m. every Friday and Saturday night in October. You can find them on Facebook here.