JACKSON, Tenn. — Every month, WBBJ 7 Eyewitness News will honor a community member with the Jefferson Award. 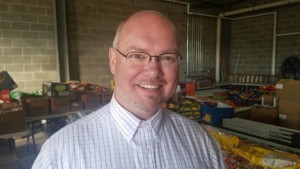 The national Jefferson Awards Foundation in partnership with Leaders Credit Union honors local people who impact others in a positive way.

Honorees can range from elementary school students to senior citizens. We asked members of the community to nominate everyday heroes who strive to make the world a better place.

This month, WBBJ 7 Eyewitness News is honoring Jeff Wall. He’s already received a key to the city, a crystal from the county and a Reader’s Choice Award for community service. The project he set up for October 28th weekend is very sweet.

Jeff Wall and his daughter, Hannah, have unloaded millions of pieces of candy in preparation.

“We have 3.5 million pieces of individually wrapped candy,” Jeff said.

It’s all for the 10th annual Trunk or Treat coming up Saturday at the Ballpark at Jackson where local officials will be handing out candy. Jeff is the founder of the event, which is expected to attract thousands of families and children.

“I started it for my love in the community and people that’s in it,” Jeff said.

Jeff is a former police officer. Starting at 32-years-old, he had three open heart surgeries. He died for four minutes before doctors brought him back to life.

“It’s s a miraculous thing. The Lord opened a way for  me to serve more, to do more,” Jeff said.

His service to the community is why many West Tennesseans nominated him to be October’s Jefferson Award honoree. The nationwide award represents the best of public service.

“I’m very humbled they even put my name on it,” Jeff said.

“I think he gives countless hours to the community,” Hannah said. “He does everything for others. He puts others before himself. I think it’s well deserved.”

As a survivor, Jeff says he strives to provide to the community as long as he lives.

This Halloween is also proclaimed as “Jeff Wall Day” in Jackson. Trunk or Treat is from 3 p.m. to 6:30 p.m. Saturday at the Ballpark at Jackson, and it is free.