JACKSON, Tenn. — A frightening scene unfolded Friday afternoon along a busy Jackson street when a car crashed into a building. 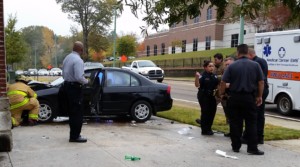 The crash happened just before 1 p.m. on North Highland Avenue near Jackson Walk Plaza when a car hit a vacant building across the parking lot from Grubb’s Grocery.

Jackson police say the crash was caused by a medical issue which caused the driver to strike a light pole before hitting the building.

Police say no one was injured. The driver was transported by ambulance.