UPDATE — Officials have identified the woman killed early Friday morning in Benton County as well as the person of interest in her death.

Her husband, 24-year-old Derek Grooms, is considered a person of interest in her death. He was taken into custody after her body was found. He faces a gun violation charge, and the sheriff says other charges are pending the outcome of the investigation.

BENTON COUNTY, Tenn. — Behind the trees, yellow tape surrounds a house as investigators search for clues in an early Friday morning homicide. 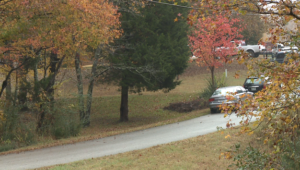 “When my officers arrived up there, there was some confusion on what had went on, but they knew there were gunshots had been fired,” Benton County Sheriff Kenny Christopher said.

Sheriff Christopher says it happened just after 2:15 Friday morning on Jayson Street just outside the city of Camden.

“They spoke to the husband that was there and talked with him. His story wasn’t making a lot of sense,” Christopher said.

What they saw next shocked them.

“They did see someone laying in the hallway back there, and that would be his wife, and they went back there and checked on her and called EMS,” Christopher said.

Officials are not confirming any names at this time but say the woman was pronounced dead at the scene. Also inside the house was the couple’s baby. Thankfully the baby was not hurt.

“She had just turned 21 years old and the husband had turned 24 years old. They had gotten married a little while ago and the child is one year old,” the sheriff said.

The husband was taken to the Benton County Jail where he is being held for questioning.

“Once we realized what we had, we called the TBI to come in and assist,” Christopher said.

Investigators are searching every inch of the property for clues.

“There was a high-powered rifle that was used and there were shots fired inside of the house,” Christopher said.

Officials are also looking closely at the husband.

“We are going to be drawing blood from the husband just to see what was in his system to see if it was drug related or not,” Christopher said.

Investigators are also looking into the couple’s relationship.

“Apparently there had been some problems going on for the last little bit,” Christopher said.

Officials have not released the names of those involved.

Stay with WBBJ 7 Eyewitness News for the latest.