OBION COUNTY, Tenn. — Crew members aboard a medical helicopter were transported Wednesday morning after the aircraft crashed in Union City. 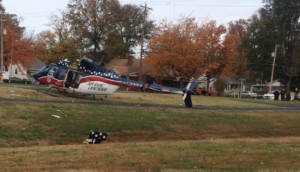 The medical helicopter crashed in the area of Harrison Street and South Home Street, according to the Union City Police Department.

“Air Evac 143 in Obion Co., Tenn., experienced a hard landing in Union City, Tenn., at 11:40 a.m. There was not a patient on board. The crew was transported to the local hospital and are reported to have minor injuries and are in stable condition.”

Officials on scene said the helicopter was performing a training exercise when the crash occurred.