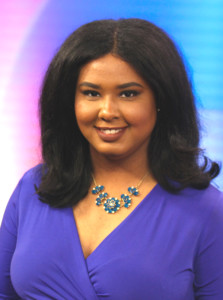 Corallys Ortiz is the Weekend Evening Meteorologist and a Multimedia Journalist for WBBJ 7 Eyewitness News, joining the Eyewitness News Weather Team in November 2017.

Born in San Juan, Puerto Rico, but raised in Leominster, Massachusetts, Corallys grew up in an area that always had rapidly changing weather. At a young age, she would drive her family crazy because she only wanted to watch the news or the Weather Channel. Her passion for weather made her want to do this professionally. She went on to attend Embry-Riddle Aeronautical University in Daytona Beach, Florida, and received her B.S. in operational meteorology along with a minor in communications and broadcast media.

While at the university, she taught beginner and advanced broadcast meteorology students post-production, writing, editing and how to produce videos used for communicating news reports and weather forecast information to the public. She was also involved in organizations such as the American Meteorological Society local chapter, Theta Phi Alpha Fraternity, and was a radio personality for WIK’D 102.5 for her Spanish music themed show “The Latin Lounge.”

Corallys also implemented her passion for communications by getting her M.A. in journalism at Emerson College in Boston. With her time at Emerson she anchored, reported and produced for one of the top college radio stations in the country, WERS 88.9 FM in Boston, creating stories for their weekly award-winning public affairs show “You Are Here” and George Knight & Company morning show. She was featured as a weather correspondent for Emerson College’s live weekly morning show “Good Morning Emerson” and served in many positions for WEBN-TV Boston. During her time at Emerson, she was selected as one of 25 people for NBCUniversal’s Summer 2017 Fellowship, working with NBC New York’s Storm Team 4.

When she’s not on camera, she loves to spend time being creative, enjoying the outdoors and spoiling her cat Lilly. Corallys is happy to call Tennessee her new home!