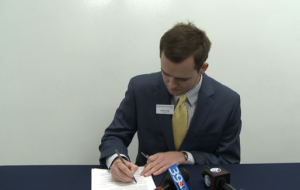 Students staged a second sit-in at the SGA office because they feel they didn’t listen to what the student body wanted.

Although it received a majority of “yes” votes from SGA senators, students who voted in the referendum on Tuesday did not show the same support. More than 1,400 students voiced their opinion in the referendum.

“The hundreds of emails that I have gotten, I’ve almost responded to all of them — some for, some against — in a respectful manner, even when the ones that I’ve gotten aren’t at all,” said SGA President Long describing the process of making his decision.

“It is a constitutional right of people to be able to exercise that right if they so choose,” Long said. 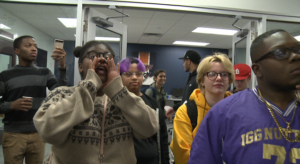 Students voiced displeasure with Long’s decision to pass the resolution.

Many students who attended Long’s announcement were hoping he would veto the resolution while those who supported and put it together are happy to see their hard work pay off.

“The vote was really something each senator I think has their own justification for, and mine was that I really was really able to contact people within my college and yield their support,” said SGA Senator Jade Bleskei who supported the resolution.

Those who opposed the resolution are now wanting the administration to reform the SGA.

“The actual resolution itself that passed is absolutely OK and OK for the senators to have done,” said Bud Grimes with Office of University Relations. “It’s also OK for those who have come out as a result of what happened with the vote and voiced their opinions.”

To take effect, it would have to be approved by the Tennessee General Assembly and signed by Governor Bill Haslam.