Every month WBBJ 7 Eyewitness news will honor a community member with the Jefferson Award. The National Jefferson Awards Foundation in partnership with Leaders Credit Union honors local people who impact others in a positive way.
Honorees can range from elementary school students to senior citizens. WBBJ asked members of the community to nominate everyday heroes who strive to make the world a better place.
This December, we are honoring Linley White. He is a retired college dean and business instructor and now he is taking his efforts to the North Pole. 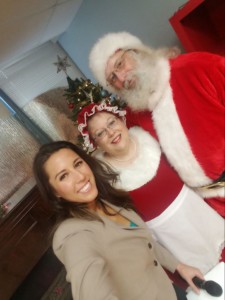 Early Head Start children can not contain their excitement to see Santa Claus at the Central Community Service Center in Paris, but what the children don’t know is that Santa Claus also goes by Linely White.

“Being Santa Claus is the best gig around,” said White.

White is a volunteer for number of clubs primarily aiming to help children in need in Henry County.

The White’s run the REAL Hope Youth Center, an after school enrichment program for first through fifth graders.

“This community has a lot of needs and we aim to fulfill those,” said White.

“You’ll never find a more generous man than he is. He sees a need and fulfills it,” says Becki White. He just gets along with kids great.”

And that’s why many community members nominated white for December’s Jefferson Award, an award that represents the best of public service.

White says even though he is retired from his day job, he will never retire from his job as Santa Claus.

White says this was his fifth stop so far visiting children this year and he is looking forward to more visits to deliver presents.