Marcia S. Graves passed away on Wednesday December 27, 2017, at the age of 82. She was born in Ridgely, TN to William Edison and Edith Ivy Stem. Marcia attended the Memphis School of Commerce and graduated the University of Mississippi Small Business Certification Program. She and her husband founded Graves Gold Leaf Gallery in Jackson in 1972, operating the business for 45 years. Marcia was a member of the Professional Picture Framers Association and Chamber of Commerce, receiving the Jackson Area Chamber’s Small Business of the Year Award. She joined First Baptist Church in 1961, enjoying serving in many roles. 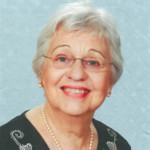