JACKSON, Tenn. — The entertainment world has lost a pioneer of blues and R&B who called the Hub City home. 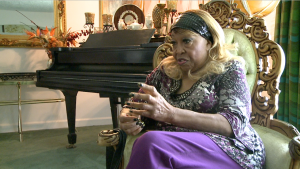 Denise, who called the Hub City home with her husband James Wolfe, is recognized as the “Queen of the Blues.”

For a couple of years she had dealt with heart problems and recently a leg amputation at Vanderbilt hospital in Nashville.

LaSalle, born Ora Denise Allen, was born in 1939 in Mississippi but became a star in the blues world after moving to Chicago and signing with the legendary Chess Records in the late 1960s.

The singer in 1971 wrote and performed the No. 1 hit, “Trapped by a Thing Called Love.”

LaSalle was recently nominated in the “Soul Blues Female Artist” category for the 39th Blues Music Awards. That event is scheduled for May 10 at the Memphis Cook Convention Center.

We’ll have more on LaSalle’s life and legacy on WBBJ 7 Eyewitness News.