JACKSON, Tenn. — In high school, A.J. Merriweather was a walking highlight for the South Side Hawks with his electrifying dunks and athleticism at such a young age. 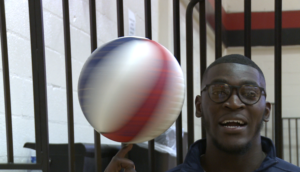 “Well, my specialty of course is dunking,” Merriweather said. “Of course, people know me as dunking.”

His high-flying style of play would result in him earning a full-ride scholarship to Eastern Tennessee State University where he had dreams of one day playing on the pro level.

“I wanted to be one and done, you know,” Merriweather said jokingly.

But that didn’t happen. He ended up staying four years, and he and his team eventually earned a berth into the NCAA tournament where he shook up social media with a dunk during practice.

“Yeah, that’s still one of my favorite dunks,” he said.

Merriweather was all over social media and even made SportsCenter for his electric dunk. That slam and many others would earn him a spot in the 2017 College Dunk Contest. From there, his athleticism was put on display for the world to see, and he happened to attract the likes of one professional team — the Harlem Globetrotters.

“When the Globetrotters first called me, you know, I was thinking hard about it, but man, I mean it’s the perfect job for me,” he said.

Merriweather admits he didn’t know much about the Globetrotters prior to that phone call, but he knew they were all about entertainment, and that was right up his alley. 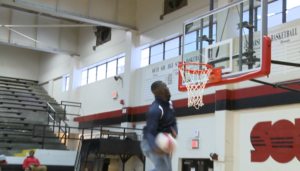 “To be able to step out on the court and to celebrate after I dunk, you know, not getting a technical foul, something simple as that, you know what I mean — it’s fun. I love it,” he said.

“He did the extra work, the extra hours, the extra communication, the extra professionalism. He just does everything extra, more than what other kids won’t do,” Fuller said.

When asked to describe his former player, Fuller kept it short.

“He’s ‘Money.’ Awesome, and you can always count on him,” Fuller said.

When it’s all said and done, Merriweather didn’t see his future panning out the way it did, but now he’s a pro ball player and an entertainer. But most importantly, he’s thankful for a job that allows him to travel the world and see things he never envisioned.

“First off, I like to thank God for giving me this opportunity. It’s a lot to life, man, and just coming from Jackson, Tennessee, a lot of people my age — a lot of people, period — don’t get to see that,” Merriweather said.

Merriweather said he plans to play for the Globetrotters for as long as God will allow him, with dreams of one day having his jersey retired.