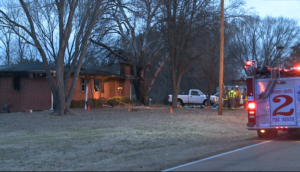 A family of five is struggling to get back on their feet after they lost everything.

“I heard a crash in the kitchen area and I came out of my bedroom and the ceiling was on fire,” Cary Watt, the homeowner said.

Watt and his family left their burning home in just the clothes they were wearing.

“I would say it’s devastating, but I’m so happy my families okay so I’m alright with it,” he said.

It all started around 4:00 a.m Saturday, when Watt was awakened by his smoke alarm.

He says the ceiling was already on fire, but he was able to help his family out to safety. 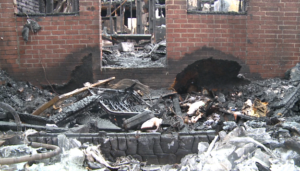 Firefighters are still trying to determine exactly what started the fire.

Gibson County fire chief Bryan Cathey says they believe it started in the roof before it spread to the rest of the house.

Cathey says multiple agencies responded, but when they arrived the house was already a complete loss.

“Fire was coming out of the roof and one whole side of the house was gone,” Cathey said.

But what took 45 minutes to get under control, could have been much worse.

“Smoke alarms, they save lives,” Cathey said. “This is proof that they do. The family will tell you this is what woke them up.”

As for Watt and his family, they’re thankful for what they do have.

“My granddaughter, my wife and my family; everybody is safe,” he said.

Officials say part of Highway 79 near Gibson was shut down for more than an hour as firefighters battled the blaze.

There were no injuries in the fire and the cause is under investigation.