Every month WBBJ 7 Eyewitness News will honor a community member with the Jefferson Award. The National Jefferson Awards Foundation in partnership with Leader’s Credit Union honors local people who impact others in a positive way. 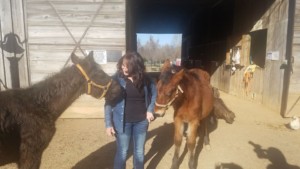 WBBJ 7 Eyewtiness News asked members of the community to nominate everyday heroes who strive to make the world a better place.

This January, WBBJ 7 is honoring Lori Collins. She says a devastating moment in her life is what led her to do what she does today.

Collins is the founder of Redemption Road Rescue in Jackson, a nonprofit organization to help neglected horses and farm animals. She says her father rescued horses up until the moment he passed away. She started this nonprofit in his honor.

“My dad was a good man and did good his whole life. So, hopefully, I can be that help for other people,” Collins said.

“We have one right now who can’t get up on her own. We have to pick her up every four hours with harness and tractor,” Collins said.

Collins’ dedication to these animals is why many community members nominated her for January’s Jefferson Award, a prestigious national recognition for community volunteerism.

“I’ve been in rescues since the 1980s and this is the best one I have worked. It’s hands down because of Lori Collins,” said Melissa Floyd, Lori’s friend and volunteer.

Collins says she admires the volunteers. Her ultimate goal is for all rescue horses to be adopted into a forever home.

“If you’re not involved in something, get involved and make a difference in this world,” Collins said.

Redemption Road Rescue is fully operated on a volunteer basis and is funded by private donations and adoption fees.