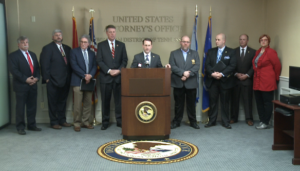 JACKSON, Tenn —  A joint investigation between federal, state, and local law enforcement officers has led to the arrests and indictments of multiple suspects.

Four west Tennessee residents who investigators say are connected to a large cocaine selling operation have been taken into custody. United States Attorney Michael Dunavant says the take-down would not have been possible without the assistance of more than 100 agents and over a dozen agencies.

After a nearly two year investigation into trafficking of crack cocaine, the U.S. Attorney’s office announced the arrest of four prime suspects with a 14 count indictment.

The alleged key players, Calvin “Fat Head” Cole, Tony “Bone” Douglas, Arvis “Shorty” Ball, and Bob Terry had been under investigation for the past 22 months. Investigators say those men are part of the Calvin Cole drug trafficking organization.

“We focus on dismantling those people not only by arrest and indictment, but also by asset seizure and forfeiture of criminal proceeds and ill gotten gains,” Dunavant said.

The suspects, who were accused of operating in Crockett and Madison Counties, were taken into custody during a drug bust on February 1.

“It’s been a long time coming and we’re extremely happy and satisfied with what we have, but we still got a ways to go,” Crockett Co. Sheriff, Troy Klyce said.

Over 100 agents served 13 search warrants at the same time. Not only did agents arrest the men, but they also seized 280 grams of crack cocaine, multiple weapons, luxury cars, and over $300,000 in cash.

“This is a prime example of what can be accomplished when several law enforcement agencies come together to achieve one common goal and that’s exactly what happened in this case,” District Attorney for the 28th Judicial District, Gary Brown said.

Authorities say hundreds to thousands of man hours were involved, with the Violent Crime and Drug Task force leading the case.

“We focus on these large multiple level drug conspiracies that we know are reeking havoc and selling poison in our communities,” Dunavant said.

Law enforcement officers say drugs and violence are flooding areas across the state. Although officials encourage those struggling with addiction to get help, investigators are cracking down on those bringing drugs into the community.

“We’re coming for you, we will continuously pursue you until you are brought to justice,” TBI Public Information Officer, Micheal Jones said.

If you or someone you know is struggling with addiction you can call the Tennessee Redline for help. That number is (800)-889-9789.

U.S. Attorney Beth Boswell is prosecuting the case on the government’s behalf. The men each have hearings scheduled in federal court later this week.