JACKSON, Tenn. — Elementary school teacher Jason Dover sat next to his attorney as the Jackson-Madison County School Board determined the fate of his teaching career, Thursday evening. 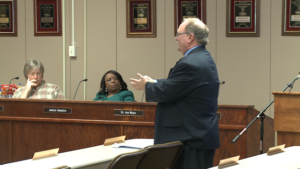 “The board wants us to come to the school, to the central office, to feel like we have a safe place, but yet when somebody like me speaks up, this is what happens, so it’s preventing other teachers from stepping forward, too,” said Dover.

Dover is a first year special education teacher at Denmark Elementary. The Tennessee Department of Education claims he violated the integrity of a second grade student’s TN Ready test score. They say while supervising, Dover provided the student with additional testing and assistance and coaching, but Dover says he was inadequately trained to supervise the test.

“These two testing coordinators got together, who didn’t know what they were doing, and so I feel the school board is blaming me,” Dover said.

The school board unanimously voted Thursday to proceed with the recommendation of the hearing officer and move forward with Dover’s termination. 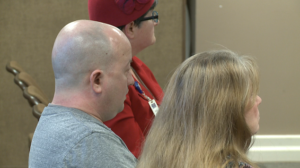 Other issues on the agenda included the recognition of Wells Johnstone, a senior at Madison Academic and national finalist for Wendy’s High School Heisman Award. The school board also voted to change the name of Whitehall Pre-K to Nova Learning Center, and superintendent Eric Jones mentioned in a report how teachers need to get the support they need to solve student issues within their classrooms.

“Just us continuing to coach our instructional framework, and make sure we’re providing the support necessary to help our teachers deliver instruction in a manner that is going to be of most benefit to our students,” said Superintendent Eric Jones.

Regarding Jason Dover’s termination, the school board attorney had no comment, saying the case is still pending. Dover told WBBJ 7 Eyewitness News he plans to appeal the decision and possibly take the case to chancery court.

Along with Bob Alvey, who announced earlier this week he would not seek re-election for school board chairman, board member David Clift also announced Thursday that he will not be running for re-election for the upcoming school year.

UPDATE: Dover’s teaching license has never been suspended or revoked.