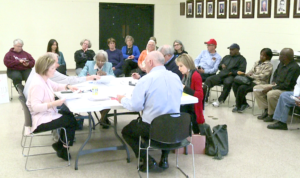 The meeting was held to discuss basic housekeeping items in preparation for the upcoming May 1 primary election. The Election Commission is responsible for all elections held in Madison County.

“Today at our election commission meeting, we set the early voting hours and appointed some election officials,” Madison County Administrator of Elections Kim Buckley said. “We also did some other things that the statutes require us to do.”

Aside from responsibilities such as appointing election officials and machine technicians, a hot topic in this meeting was early voting hours, something the Jackson-Madison County NAACP branch wanted to be extended.

“We heard from all sides, and our election commission voted to keep the early voting hours essentially the way they have been in the past,” Buckley said.

Buckley says voting is important and that it affects a citizen’s life in more ways than one.

Buckley also says you can register to vote or change your address online. Additional information can be found at madisonelections.com.

“I would love to see a lot more people participating in local elections,” Buckley said.

A few offices included in the upcoming primary are County Commission, the county mayor and the sheriff.