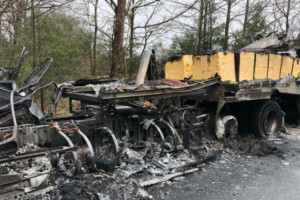 According to Gibson County Fire Chief Bryan Cathey, crews responded around 6 a.m. to a report of a truck on fire on Davis Grove Road near Bradford.

The 44,500 pounds of cheese could not be salvaged, according to Chief Cathey.

The road was blocked as crews worked to clear the scene but was expected to reopen by 2 p.m.

Woman calls police on home intruder, turns out to be robot vacuum