Norwood Jones is a native Jacksonian. He is President of the Optimist Club, Red Coat member, and the past Director of Southwest Tennessee Tourism. He may be 87-years-old, but he’s young at heart.

He credits his long life to a happy marriage. He and Joyce have been married for 66 years.

“Oh, the secret is one day at a time and the woman should always have a separate checking account,” laughed Joyce.

The two Jackson natives have had each other’ 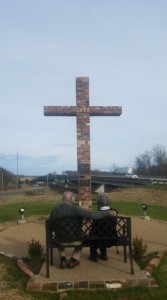 s back since 1964 when they opened The Old Country Store.

“I think what we have done with that store may have impressed people,” said Norwood.

“Something just came over me and said ‘Norwood take those bricks and make a cross,'” said Norwood.

And that’s just what he did. Norwood constructed a brick cross between U.S. Highway 412 and Old Bells Highway.

“Every brick has a very interesting story behind it. That’s worth everything we did to put that cross up there,” said Norwood.

The cross is dedicated to God and his wife, Joyce, yet his dedication to the West Tennessee area is why he is February’s honoree of the Jefferson Award, a national award that recognizes community champions.

“You know, it’s a great honor you did this for me, as I say at my age, this is wonderful and thank you for you and WBBJ,” said Norwood.

Like all Jefferson Award honorees, Norwood will have his very own picture up on a billboard that you can see in different parts of town.
He also wrote the song “Hoe Soe Moe” that you can view on YouTube.

If you have someone in mind who has made a positive impact on the community, nominate them for the Jefferson Award by clicking on the “Jefferson Award” tab.