JACKSON, Tenn. — Hundreds of West Tennesseans dined Thursday at Jackson Fairgrounds Park at the First Ladies’ Luncheon, raising money for an important cause. 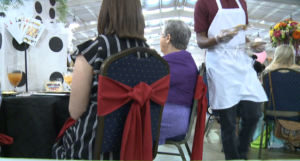 “I truly believe if it wasn’t for the agencies that are partnered with United Way, I would not be in the point of life I am in today,” United Way volunteer Stefania Wheeler said.

Wheeler found out she was pregnant at 23, turning to United Way of West Tennessee for help.

“Life Choices really helped me with finding resources to better my life and the life of my child,” Wheeler said.

“United Way believes in everyone having a safe home, an education and just to take care of not only children, but adults,” Archer said.

United Way serves 14 counties in West Tennessee, and organizers say the lunch is their biggest fundraiser.

“It’s probably the most unique event in West Tennessee,” Scott Conger, CEO of United Way of West Tennessee, said. “Every company that buys a table can decorate it themselves with their own theme.”

After lunch, Wheeler shared her story with the crowd.

Now a volunteer for United Way, she hopes to inspire others to do the same.

“It brings us together, and we start figuring out that teamwork makes the dream work,” Wheeler said.

This is the fifth year for the annual luncheon.

Event organizers say the luncheon brought in more than $24,000 last year for the organization.